The broadcast, which will be just the second primetime boxing presentation on the CBS Television Network in nearly 40 years, is headlined by the highly anticipated welterweight world title unification between unbeaten stars Keith Thurman and Danny Garcia. The broadcast is presented by Premier Boxing Champions and produced by SHOWTIME Sports® for CBS Television, both divisions of the CBS Corporation.

Lubin and Cota will open the broadcast with an elimination bout for the WBC Super Welterweight World Championship held by undefeated champion Jermell Charlo, who is due a mandatory bout against No. 1 contender Charles Hatley. The highly regarded Lubin (17-0, 12 KOs) will face his toughest opponent to date in Cota (25-1, 22 KOs) as both men vie for their first world title shot.

“I’m very excited that I have the opportunity to showcase my skills on CBS, especially on one of the most anticipated fight cards in boxing,” said Lubin. “I’m facing a tough, rugged fighter in Jorge Cota, who I know is coming to fight. He’s got a lot of heart and fans are going to witness a great battle between two warriors who are going to leave everything in the ring. This will be my New York debut at Barclays Center in Brooklyn and I can’t wait to give the fans a great performance.” 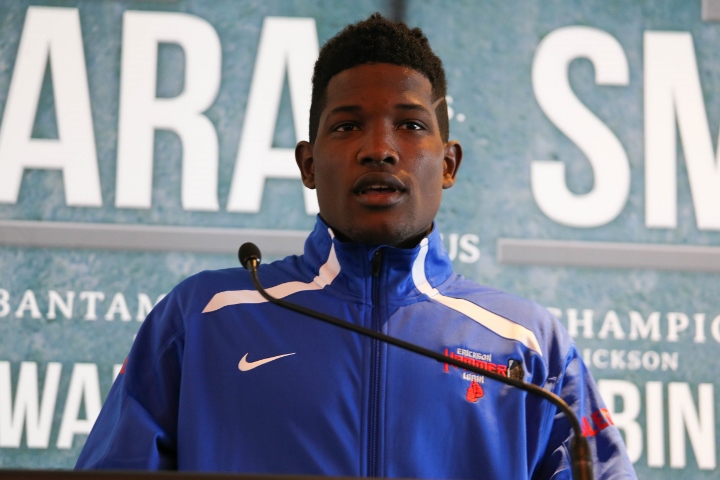 “I’ve been waiting for this opportunity for over a year and I am looking forward to becoming the mandatory for the championship on March 4,” said Cota. “Lubin has never faced a crafty fighter like me. Lubin has some experience, but I will be his first real challenge. Don’t be surprised if I knock him out.”

Tickets for the live event, which is promoted by DiBella Entertainment, start at $50 (not including applicable fees) and are on sale now. Tickets can be purchased online by visiting www.ticketmaster.com, www.barclayscenter.com or by calling 1-800-745-3000. Tickets are also available at the American Express Box Office at Barclays Center. Group discounts are available by calling 844-BKLYN-GP. The Lubin vs. Cota fight is co-promoted with Sampson Boxing.

“Erickson Lubin is one of the hottest prospects in boxing; many consider him to be the top young prospect in the game,” said Lou DiBella, President of DiBella Entertainment. “On March 4, he will be tested in front of a national television audience against Jorge Cota in a title elimination bout. If ‘Hammer’ is successful in this tough test, he’ll graduate from prospect to serious championship contender.”

Since bursting onto the scene in 2013 at just 18-years-old, Lubin has impressed with his exciting style, power and ability to finish opponents with both hands. The 21-year-old fights out of Orlando and concluded a big 2016 by being named ESPN’s “Prospect of the Year.” Lubin has won nine times in the last two years against increasingly experienced opposition and most recently knocked out then once-beaten Juan Ubaldo Cabrera in the second round of their December matchup on SHOWTIME BOXING on FACEBOOK LIVE.

The 29-year-old Cota scored two knockdowns and won an entertaining 10-round battle with Cuban Olympic silver medalist Yudel Jhonson in his U.S. debut in 2015. Fighting out of Sinaloa, Mexico, Cota enters this bout having won nine bouts in a row, including six that ended inside of the distance. Sporting an 85 percent knockout rate, Cota scored knockout victories in his first 16 pro fights.